To Walt Whitman America was a place where grass was “hopeful green stuff.”Prairies left a lasting impression on writers who visited the Great Plains in the 19th century, often describing them in terms of vast waves of wind swept blades surrounded by boundless sky. On his first trip west Whitman wrote in Specimen Days, #179 Prairies, “…stretching out on its own unbounded scale, unconfined, which there is in these prairies, combining the real and ideal, and beautiful as dreams.” Three of Whitman’s poems on prairie grass: “The Prairie-Grass Dividing,” “The Prairie States,” and “A Prairie Sunset.”

William Least Heat- Moon wrote in his book “PrairyErth,” Whatever else prairie is—grass, sky, wind—it is most of all a paradigm of infinity, a clearing full of many things except boundaries, and its power comes from its apparent limitlessness; there is no such thing as a small prairie any more than there is a little ocean, and the consequence of both is this challenge: try to take yourself seriously out here, you bipedal plodder, you complacent cartoon.”

And then I understood: I like this prairie county because of its illusion of being away, out of, and I like how its unpopulousness seems to isolate it.  Seventy percent of Americans live on two percent of the land, but in front of me, no percentage of them lived.  Yet, in the far southeast, I could see trucks inching out the turnpike miles, the turbulence of their passage silenced by distance.  And I could see fence lines, transmission towers, and dug ponds, things the pioneers would have viewed as marks of a progressive civilization but which to me, a grousing neo-primitivist, were signs of the continuing onslaught.  The view I had homesteaders would have loved, and the one they had of unbroken vegetation and its diversities I would cherish.”

…while I’ve not lost my pleasure in wooded hollows, I’ve come to cherish absolute treelessness. “

George Catlin, the 19th century artist best known for his exploration and images of the American West, once described a prairie in Kansas as, “so high that we are obliged to stand in our stirrups in order to look over its waving tops as we are riding through it.” 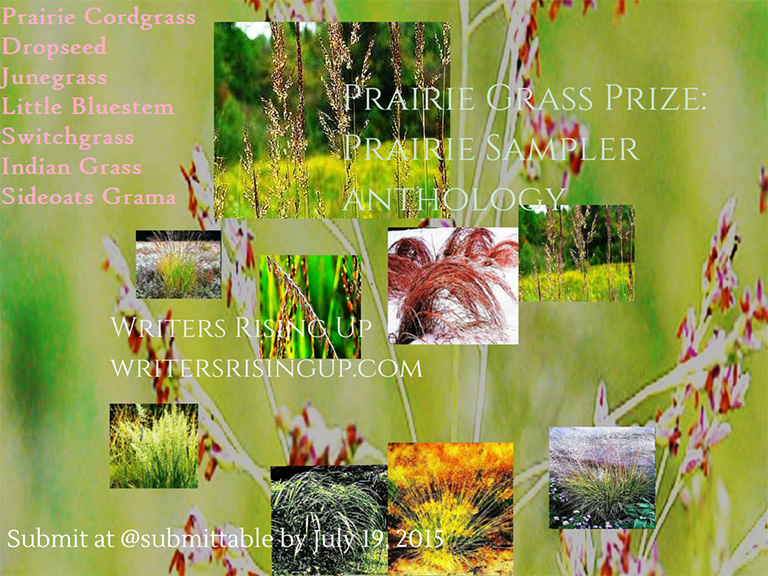 For inspiration these plant descriptions and terminology will help in crafting your poems. Another way to familarize yourself with the grasses is to Google prairie quotes and prairie poems before you begin writing. Here following are descriptions and a link below to Lady Bird Johnson’s Wildflower Center online which contains a compendium of images and descriptions which should be helpful.

Prairie Dropseed is a clump-forming, native perennial grass which occurs in prairies. Fine-textured, hair-like, medium green leaves (to 20″ long and 1/16″ wide) typically form an arching foliage mound to 15″ tall and 18″ wide. Foliage turns golden with orange hues in fall, fading to light bronze in winter. Open, branching flower panicles appear on slender stems which rise well above the foliage clump in late summer to 30-36″ tall. Flowers have pink and brown tints, but are perhaps most noted for their unique fragrance (hints of coriander). Tiny rounded mature seeds drop to the ground from their hulls in autumn giving rise to the descriptive common name.

June Grass also known as Prairie Junegrass, the perennial is a widely-distributed prairie grass that flowers earlier than many other upland prairie grasses.  Its plumes of silvery-green seed heads turn tan by mid-summer.  The foliage supporting these seeds is also an attractive green-gray color.  June Grass actively grows during the spring and fall when soil temperatures are cool and likes full sun and dry, often sandy, soil.  Its preference for dry, sunny conditions makes it a popular candidate for green roofs.

Little Bluestem is one of the dominant grasses which grow in the rich and fertile soils of the tallgrass prairie. It grows 2-4′ tall and occurs in prairies, open woods, clearings, glades. The perennial forms upright clumps of slender green leaves with a tinge of blue at the base. Purplish-bronze flowers appear in 3″ long on branched stems rising above the foliage in August. Resulting clusters of fluffy, silvery-white seed heads are attractive and may persist into winter. Most outstanding feature of this grass may be the bronze-orange fall foliage color.

Switchgrass is a clump-forming  perennial grass with open, lacy sprays and curly leaves with small seeds from Aug to Oct. The plant has purple stigmas at flowering time. Switchgrass grows from 3 to 6 ft., and has a large, open, finely textured, reddish-purple seedhead. Its fall color is pale yellow. Bright green leaves occur up and down the stem, turning bright yellow in fall. Switchgrass is one of the dominant species of the tallgrass prairie. Yellow colored clumps last throughout the winter. Switchgrass is used to make bio-fuels.

Indian Grass is a perennial native grass. Indian grass grows 3 to 7 feet tall, and the seed head is a single, narrow, bronze-yellow panicle that matures to brown. The seed is light and fluffy with small awns attached. Indian grass is used for erosion control, livestock feed, as pollinator, a restoration grass, and for wildlife. Indian grass attracts white-tailed deer and the seed is consumed by birds and small animals, livestock also forage on Indian grass and other warm season grasses on rangeland, pastureland, and hay land. It also helps in critical areas and roadside cover subject to wind erosion.

Prairie Cordgrass  is a coarse, tough, perennial grass that grows in dense, arching clumps from 4 to 7′ tall when in flower. Typical habitat is freshwater marshes, swampy open valleys, slough and pond margins, low spots along roads and railroads and both wet and dry prairie areas. The perennial has glossy dark green leaves (to 4′ long and to 5/8″ wide) with sharp edges. Its leaves turn yellow in autumn. Flower stems rise above the foliage clump in July-August bearing terminal clusters of straw-colored flowers arranged comb-like on cluster branches with comb-like appearance of flower panicle branches. This species is also commonly called slough grass and ripgut (sharp-edged leaves).

Side Oats Grama is a perennial clump-forming grass with 2 to 3 ft. stems in erect, wiry clumps. Purplish, oat-like spikelets uniformly line one side of the stem, bleaching to a tan color in the fall. The basal foliage often turns shades of purple and red in fall.