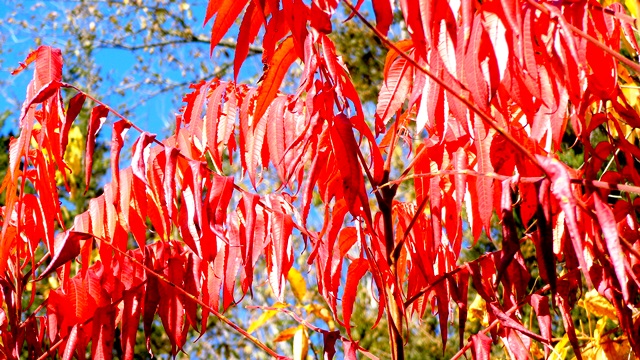 Chemical of the month? Cholorphyl, you say.

Actually, no, because cholorphyl depends on sunlight and warmer temperatures. What happens in the fall is colder temperatures destroy Cholorphyl and other chemicals step in like Carotene and Anthocyanins, the former produces yellows, the latter blues and blue green. A reaction of Anthocyanins and sugars, depending on the light, produces red leaves.

If there exists a system of color in poetry, like in nature, it has been described as a “moving army of metphors” that can be detached from reality. While Thoreau regarded autumn as a season of unparalleled vibrancy, Dickinson used fall as a backdrop for longing and waiting in a season devoid of color.

Thoreau wrote in “Autumn” Sept 25, 1854, “I suspect that I know what the brillancy of the autumnal tints will depend. On the greater or less drought of the summer. If the drought had been uncommingly severe, as this year, I should think it would so far destroy the vitality of the leaf that it would attain only to a dull, dead color in autumn; that to become brilliant in autumn, the plant should be full of sap and vigor to the last.”

In “Atutumnal Tints” Thoreau compares the chameleon colors of autumn to the mellowing and aging of man: a season inseparable from the human experience because autumn like man adapts to change. Man according to the alternating soceital soil and nature to shorter days with less light and cooler temperatures.

Thoreau wrote in “Autumnal Tints,” Most appear to confound changed leaves with withered ones, as if they were to confound ripe apples with rotten ones. I think that the change to some higher color in a leaf is an evidence that it has arrived at a late and perfect maturity, answering to the maturity of fruits. It is generally the lowest and oldest leaves which change first. But as the perfect-winged and usually bright-colored insect is short-lived, so the leaves ripen but to fall.”

In Dickinson’s poem, “If you were coming in Fall,” she wrote of a waiting game brushing summer away like a fly; storing yarn balls of time in drawers, tossing time like a pealed rind, and still waiting for that unknown sting, like a bee.

While tint, and blush pauses in this rendition of fall, the solemnity of waiting loiters in a colorless shroud. Color an emotion her waiting could not embrace. Two remarkable examples of how the human condition and nature are inextricably linked.