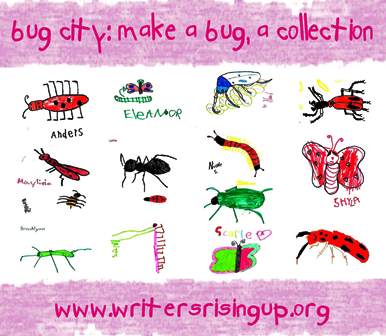 In 2016 Bug City: Make a Bug poetry submission will be a lot more fun for kids. Poems will again focus on the species at the Elizabeth Fries Ellet Interpretive Trail at the Richard T. Anderson Conservation Area. Poems must be in the shape of a bug. Examples of Shaped Poems can be found here at Pinterest. Shaped poems can also contain words that are written side-ways or in circles. As long as the poem is easy to read, printed or typed it’s acceptable.

If you are writing a poem about an Ebony Jewelking it would appear narrow and elongated with words that jutted out for its six legs: three pairs of jointed legs on each side of its body and usually four wings (two pairs) for winged insects. Poems about butterflies would look very much like words in the shape of wings attached to a long shape consisting of a long line of words.

Both content and visul presentation of the Shaped Poems are considered equally.

Insect Images and submission guidelines can be found at Writers Rising Up’s Eventss and Contest’s Link.