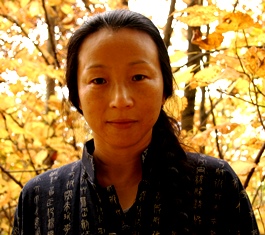 First of all, it’s not earth nor it’s rare, as they say

It lies under our feet, sparkling the soil we farm

We came here as guests—Hakka—fleeing from angry

Lords. Year after year, we bent over the earth

Feet and hands in the neon soil, our sweat

Our stove cooked the fragrance from the sun and moon

Now we dig, deep in the mud, our boots

Rotting in the rainbow sludge…Dig, and we dig

Ten Yuan a sac, this red dirt speckled with

Blue and yellow. Home, we say, a small haven

Painted with green. Now the mountains are lifted

Deep crates in the fields, blood and pus in rivers

Streams…all because the world wants this earth

Guided missiles—things that make the world

Cleaner and more beautiful, as they say

And here we are, in the waist deep sludge

Can’t even sip the porridge laced

With the thousand-year-old eggs

In the iron wok,  we exhume

All the names of Gods, they say

If gods have eyes, why didn’t they see us

Slaves of this world that no longer holds?

In the distance, a mushroom of dust—Boss

And his Toyota Prius, powered by the sludge

Ripped under our feet. We’re slipping

Digging, pulling, no food or water

Our quota still short, the boss will be mad

But no matter. I light a cigarette, each puff

Is the last. Tomorrow is gone, like our village

Here and far away, where horses ran wild

Under the sky, where we, children of

Genghis Khan, return every night in our dream

That is gone, too, they say. Mongolia

Our origin, now a rare earth pit for the world

Wandering on this bare earth

·  Hakka: Nomads from Mongolia, scattered all over China and world. Most of them now live in Guandong, where the rare earth metals are mined and leached in stone age methods. Inner Monglolia and Guangdong produce 95 percent of the rare earth supplies for the world.